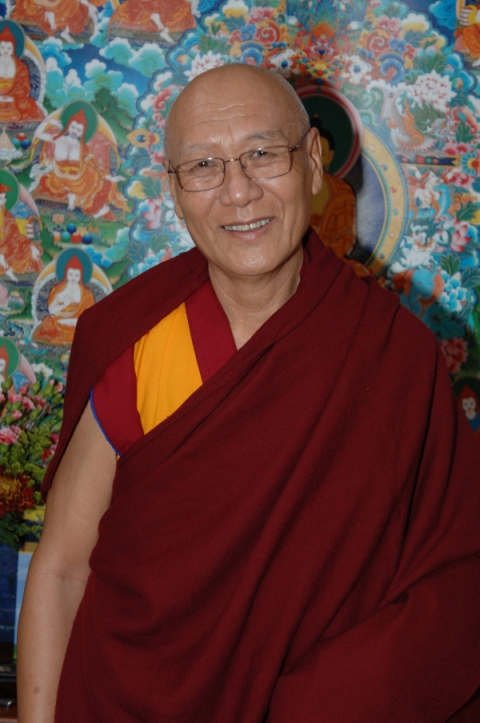 Khensur Rinpoche, Geshe Tashi Tsering, OAM, is a highly respected Tibetan teacher of the Gelug tradition founded by Lama Tsong Khapa. He is based in Brisbane where he teaches regularly at his School of Buddhist Science in Spring Hill, Tashi Khangmar Samdrub Ling, aka TKSL. He also teaches regularly for the Good Fortune Trust.

From April 2009 until October 2014, he was first the Vajra Master and then Abbot of Gyu-me Tantric College in southern India. Gyu-me is one of the primary monastic universities in the Gelug tradition, a place of further training for those monks from the Gelug monasteries who have already been awarded their geshe degree. He was chosen for this important role by His Holiness the Dalai Lama. His many students were overjoyed at his qualities being recognised in this way.

Khensur Rinpoche lived and taught in Australia for nearly 20 years prior to his return to India in 2009. He was the senior resident teacher at Chenrezig Institute in Queensland from 1990 until 2009, where he established the built up an extensive study programme of Buddhist philosophy and practice which attracted students from around the world.

Rinpoche has hundreds of students in Australia, New Zealand and Taiwan, as well as in India and Tibet, who have been inspired by his personal qualities and great wisdom. His experience with Western students and living in the West has given him great insight into Western thinking and circumstances.

Rinpoche has devoted his life to studying and practicing Buddhism and to conveying the essence of the Buddha’s teachings in clear, accessible and powerful ways. He draws from an unbroken lineage of authentic teachings and presents them in a way that is relevant and highly meaningful to modern life. Read Rinpoche’s biography here (link).

The Good Fortune Trust (link) website has details about the projects and people Geshe Tashi Tsering supports in India and Tibet.